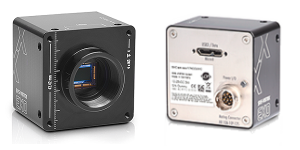 Not available for purchase outside of North America.

Built on the Sony Polarsens IMX250MZR sensor, the exo250ZU3 camera detects the polarization of light. A four-directional polarization filter using nano-wires is overlaid directly on top of the pixel array and beneath the micro lenses. This filter consists of repeated 2 x 2 patterns of grid polarizers with four different angles: 0, 45, 135 and 90 degrees. Each polarizer filters the incoming light so that only the polarization components perpendicular to the grid orientation can pass through and be detected by the underlying photo-diode. A four-direction polarization image can be captured in a single shot.

SVS-Vistek calls their EXO series cameras “the integrator’s camera,” and they do so with good reason. Most EXO cameras are built on Sony IMX Pregius sensors offering excellent dynamic range and efficiency with a high signal-to-noise ratio. These cameras deliver all the imaging control you would expect, plus a surprising amount of I/O functionality. Being Genicam compliant, most machine vision software platforms can easily communicate with EXO cameras. And, for those that prefer to develop a custom application, there is a free SDK.

The EXO series cameras have a precision-machined 50 x 50 mm IP40 aluminum body. The unibody housing ensures excellent temperature distribution, enabling today’s image sensors to run cooler. The rigid lens mount keeps lenses properly positioned to maintain sharp focus. There are mounting holes on five faces of the housing, plus a standard 1/4-20 tap on the bottom for attaching a tripod.

This USB3 Vision camera has two trigger inputs plus an optically-isolated input. There are four outputs. There is also an RS232 input (RXD) and output (TXD). Inputs use Schmitt triggers for better noise immunity. Both inputs and outputs support discrete 24 VDC.

The camera’s inputs offer unusual functionality. They can be configured to debounce inputs, control timing of camera operations and output signals, and control four independent pulse (PWM) generators. Timing functions can be programmed with a resolution of 15 ns. A pulse divider lets you take an action on every nth signal, where n is a value between 1 and 15. Logic gates (AND, NAND, OR, NOR) combine signals to make decisions.

A built-in LED driver enables control of external lights. The driver delivers up to 3 amps for 40 ms, or 0.3 amps continuously. High-frequency PWM functionality enables the camera to control light intensity. Most EXO models support up to four independent lights.


Learn about camera specs in our Camera Tech Center.

About this Polarized Camera (PDF)

How to Trigger exo Camera

Learn from our Camera Tech Center


Sign In or Register to unlock all links above.

The manufacturer will repair or replace defective cameras within two years of factory shipment. For further information, please refer to the manufacturer's website.

We're interested in making sure you're happy with your purchase. Some models are available for a 30-day evaluation. The return of cameras is subject to factory discretion. Any cameras approved for return must be in new condition and in their original packaging. Returns will be subject to a restocking fee.

All returns must be pre-authorized by Machine Vision Store and shipped with freight pre-paid. Please contact us to request authorization and instructions. The item's serial number and associated sales order number will be needed.