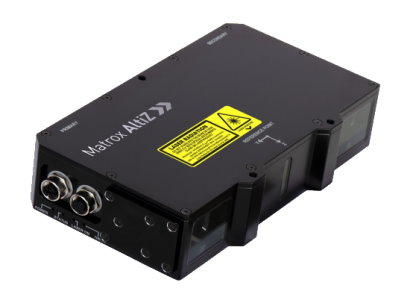 The Matrox AltiZ AZ1D4SR and AZ1D4SB 3D profilers are ideal for inspecting smaller objects. They both have a range (Z) of 70 mm. The field of view (X) is 55 to 70 mm, depending on the range. X resolution is 38 µm per pixel. Z resolution is 40 to 80 µm per pixel, depending on range. The resolution in the direction of travel (Y) dependents on the scan rate. The AZ1D4SR has a red laser and the AZ1D4SB has a blue laser, enabling inspection of a wide range of materials.

The Matrox AltiZ 3D profiler captures and sends calibrated profiles, depth maps, or point clouds over a standard GigE Vision interface. The AltiZ projects a single laser line onto objects, which is imaged by two CMOS sensors. The position and shape of the line across the object indicates the object’s shape and distance from the AltiZ. This process is repeated rapidly as objects move underneath the laser. The resulting images are processed using patented algorithms to generate calibrated profiles, depth maps, or point clouds. This data is then sent to a computer for further analysis.

The Matrox AltiZ has two image sensors. This enables the profiler to capture steep surfaces and steps that would otherwise be occluded in single sensor designs. The dual sensors also enable additional robustness in the image processing stage.

The Matrox AltiZ features an aluminum IP67 housing with M12 connectors, perfect for most industrial environments. There are many mounting options, with provision for precisely stacking multiple scanners across a wide conveyor. The 24 volt digital I/O can be connected to an incremental encoder, as well as synchronize multiple scanners. Each scanner can be powered by either power-over-ethernet (PoE) or a separate 24 VDC supply.

The AltiZ works well with both Matrox Imaging Library (“MIL”) and Matrox Design Assistant (“DA”). The former is a powerful SDK; The later is a flowchart IDE for building image analysis tasks and HMI web pages. The AltiZ is also compatible with third-party software that supports the GigE Vsion, GenICam GenDC, and GenICam PFNC 3D standards.


Learn about camera specs in our Camera Tech Center.

Available in US Great Plains.

Learn from our Camera Tech Center


Sign In or Register to unlock all links above.

Orders for this item cannot be cancelled, nor returned. (Sorry, but this is the manufacturer's policy.)